Your guide to our headline show - All That We Are

We're taking the action off the stage and into the air, in a world-first. 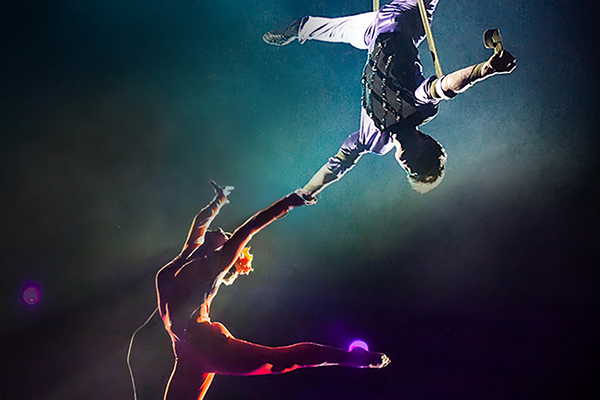 When it comes to headline performances, we know how to pick them.

Well before Melbourne-based Theatre Company, Strange Fruit supported Kate Miller Heidke in her performance at this year’s Eurovision they were swaying on their giant poles for us at Real Festival in 2017. And last year’s epic Mountain performance by Stalker Theatre? It’s now touring the country and appearing at other amazing festivals.

It’s fair to say we lead the way when it comes to headliners. So strap yourselves in, because this year we’re taking things up a notch.

All That We Are (Todo lo que Somos) is like nothing you’ve ever seen before. Literally. This Spanish/Australian production has been created especially for us and it will have its world-premiere on Friday night at the event. This new major work from Spanish director Younes Bachir and Australian choreographers Strings Attached is a breathtaking aerial spectacular involving more than 30 performers.

The 20-minute show takes you on a captivating, mysterious and mesmerising journey across land, air and water. At the centre of the show are four skilled performers whose aerial talents are sure to thrill and delight crowds. These amazing aerialists are supported by a group of performers representing different ages, walks of life and backgrounds who have bravely volunteered to be part of the show.

Without giving too much away (because we don’t want to spoil the surprise) these performers come together in a series of beautifully choreographed moves on the ground and just when you think it can’t get any better – get ready for some spine tingles as an awe-inspiring, gravity-defying display forms above you symbolising unity, connection and solidarity between cultures.

It’s deep, it’s beautiful, it’s glorious and it’s not to be missed.

The natural amphitheatre at Tench Reserve is ideal for this show as anywhere you sit will offer great views of all the action. Our tip would be to get there early to secure a good position on the grass. Don’t miss the world premiere at 8.00pm on Friday night. But if you do it’s ok because there’s a repeat performance at 7.00pm and 8.45pm on Saturday night.